Denizens: A Narrative of Captain George Denison And His New England Contemporaries 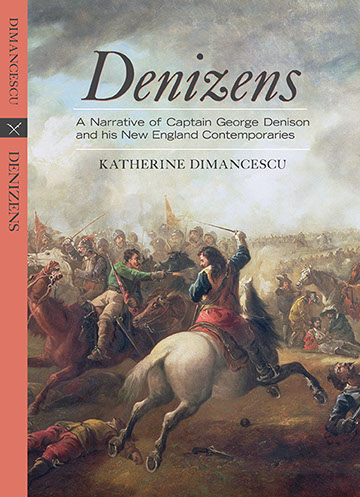 Welcome to the seventeenth-century. Be transported back in time to the pulpits, pews, Praying Indian villages, pastures and palisades of early colonial New England.

Denizens shares unforgettable true stories of reinvention, romance, sacrifice, family life, and bravery on the New England frontier and in its early settlements. Journey back and forth across the Atlantic Ocean with Captain George Denison and go into battle with him during the English Civil War and later King Philip’s War.

Meet Reverend John Eliot and learn about the Algonquin language Bible he created. Learn about the interactions and disagreements that took place as Captain George Denison and his contemporaries established new colonies and communities. Take in the language of the period through passages selected from ancient diaries, court documents, and military histories. Ms. Dimancescu’s stories about the search for her seventeenth-century maternal ancestors brings them to life for a modern-day audience. This non-fiction narrative fosters an appreciation and understanding of the courage, fortitude, and resolve of a small group of denizens, who left behind indelible legacies in American history.

SEE INSIDE THIS BOOK ORDER YOUR BOOK TODAY!